Conference: Human Traffic: Past and Present 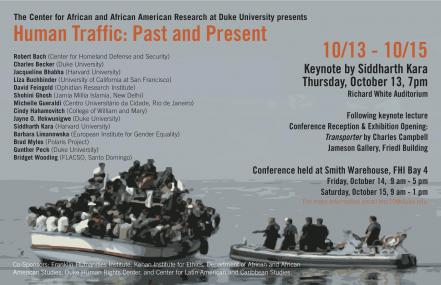 Today, it is estimated that approximately 27 million people, mainly women and children, are involuntarily displaced,  and held in bondage by force or by fear. The U.S. department of State estimates that over 800,000 persons are trafficked annually. According to the International Labor Organization, human trafficking is a major ‘industry’ which in 2005 earned roughly US$31.6 billion. On October 13-15th, 2011, the Center for African and African American Research (CAAAR) at Duke University will assemble a group of internationally renowned scholars to discuss the global phenomenon of human trafficking and the specific lessons of Africans’ cruel but historically momentous incorporation into global capitalism.  Co-sponsored by the Franklin Humanities Institute, the Kenan Institute of Ethics, the Department of African and African American Studies, and the Center for Latin American and Caribbean Studies, this conference aims to tell the stories of the people who have been tricked, coerced, and manipulated, of the criminals who profit from their suffering, and of the state officials who at times challenge and at times profit from the trade, and of the whack-a-mole efforts of the NGOs.  “The harm it inflicts and the number of people affected make human trafficking one of the most egregious crimes of our era,” says CAAAR director J. Lorand Matory, who adds, “it demands not only our intervention but our thoughtful intervention.

We will also explore the more general questions that these stories raise about freedom, human rights, and the agency of the downtrodden.  For example, is prostitution inherently coercive?  Should children be compelled to labor, and, if so, do they have the right to compensation?  Who is responsible for the bad choices of people who feel they have no good choices?  When does the collectivist ethic of  “family obligation” become a “human rights” violation?  When do debt and apprenticeship become slavery, and when does a contract become a yoke?  When does private enterprise become criminality, when does migration become trespassing, and who has the right to decide?  “Through the prism of ‘Human Traffic: Past and Present,’” summarizes CAAAR Associate Director Michaeline Crichlow, “we must, of necessity, re-examine the meaning of ‘race,’ ‘freedom,’ ‘citizenship,’ and ‘home’ for every human being.”

Suzanne Shanahan, Associate Director for the Kenan Institute for Ethics, adds, “This conference provides a rare opportunity to together engage scholars, artists and activists on a set of critical ethical concerns raised both by trafficking and human displacement more generally.”