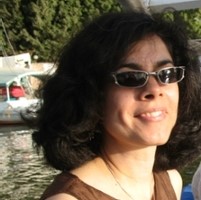 Kamala Visweswaran  received her Ph.D. from  Stanford University in 1990. She now teaches as a Professor of Ethnic Studies at UC-San Diego.  She writes in the fields of feminist theory and ethnography, South Asian social movements, ethnic and political conflict, human rights, colonial law, postcolonial theory, South Asian literatures,  transnational and diaspora studies, comparative South Asia and Middle East studies. She has taught in Nepal and Sri Lanka, and worked in Tamil Nadu and Gujarat, India, receiving Fulbright and American Institute of Indian Studies awards for her research, as well as fellowships at the University of Chicago Humanities Institute, the Radcliffe Institute of Advanced Study at Harvard, the Stanford Center for Advanced Study in the Behavioral Sciences, and the Princeton Institute of International and Regional Studies. She is an editor of the journal Feminist Studies, and was the North American editor of Cultural Dynamics (1998-2005). She is the author of Fictions of Feminist Ethnography (Minnesota, 1994) and Un/common Cultures: Racism and the Rearticulation of Cultural Difference (Duke, 2010). She is also the editor of Perspectives on Modern South Asia (Blackwell, 2011), and Everyday Occupations: Experiencing Militarism in South Asia and the Middle East (Pennsylvannia, 2013). Her current book under contract with Duke University Press is “A Thousand Genocides Now: Gujarat in the Modern Imaginary of Violence.”